Commons Collaborative Economies: Policies, Technologies and City for the People is a project which aims to highlight the relevance of the commons-oriented approach of peer production and collaborative economy, while proposing public policies and providing technical guidelines to build software platforms for collaborative communities.

From the organisation of the first edition of the “Commons Collaborative Economies” event we want to thank the more than 300 participants for their contribution to  sessions, and celebrate the great effort and collective success of these days. Many others joined us via streaming.  Participation was very rich, productive and plural. With participants from 32 countries, people with different profiles (25% researchers, 20% entrepreneurs, 16% technical, 8% cooperativists, 7% commoners, 4% designers, 3% journalists, makers, and policy makers). Contrary to what’s usually the case with events of economic or tech nature, participation was very plural, with 45% of women and 55% men participation and involvement of men and women in all sessions. 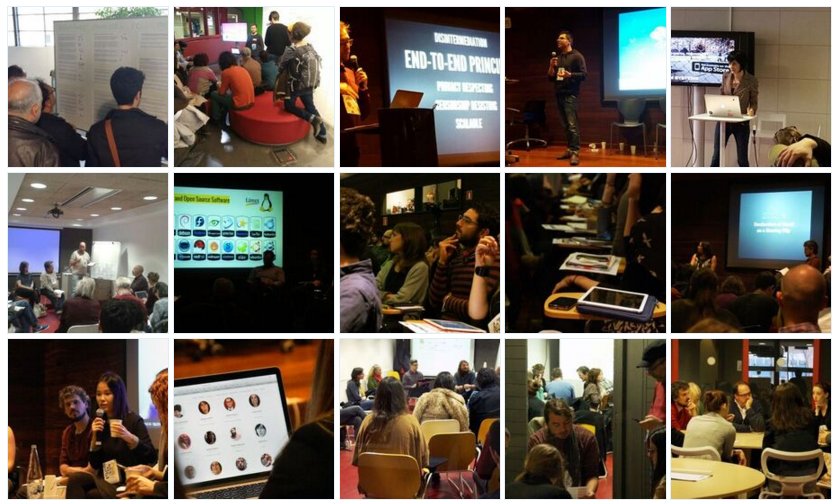 A collective reflection process involving 90 presentations and 30 lightning talks. Altogether a Twitter conversation of 4.500 messages was generated. Catalan Wikipedia thanks to the “Viquimaratò” held, it has now new items linked to collaborative economy issues, reaching half a million articles during the days of the meeting. The directory of Commons collaborative economy came to identify 1,300 initiatives in Catalonia and 400 in Europe.

There are many greetings that have come to us, and the feeling of having achieved an intense and vibrant, important project. We are so happy that we are willing for a new edition next year!

Results of the meeting

Available on this web you will find videos of plenaries and other sessions from the main auditorium and slides of all the presentations. Thanks to the project teixidora.net, almost each session has notes here in different PADs. Given the interest we have received from many places, we are also working on a collection of articles to collect ideas, new lines and debates that arose.

In terms of results, we can only be happy and proud of the level of creativity and maturity reflected in the statement of policy recommendations for governments, especially in relation to promote the Commons aspect of collaborative economy. We estimate that we have reached almost 130 proposals! They are one of the most valuable outputs of the event, as a  co-creation process of public policies that now has a document (as a work in progress, version 0.2) which is translated into English (addressed to the European Commission), Catalan (addressed to Barcelona City Council) and Spanish, addressed to other public administrations in Spain or Latin America who want to make use of it.

It has also emerged strongly the idea of ​​creating a Hub (beta) of coordination among cities interested in this set of public policy proposals, and from procomuns and Barcola are also considering the idea of ​​organizing regular networking events in Barcelona. The plan is also to facilitate the positive “contaminiación” and support for other related events with the Commons element. Meetings such as the Open Source Circular Economy days (June), FESC (Fall), OuiShare Fest Barcelona and other important meeting points in the city to come.

In the last two decades we have seen the emergence of Internet-enabled collaborative communities building shared and common resources. Commons-based Peer Production is rapidly growing, not just for the disruptive and very successful cases of software (with free and open software) and encyclopedias (Wikipedia) but also for information (OpenStreetMap, Wikihow), hardware (FabLabs, Open Source Ecology), accommodation (Couchsurfing) and finance/currency (Goteo.org, local coins).

More recently, we have also seen the emergence and growth of hybrid models which retain some similar organizational logic, such as being based on collaborative principles, but privatizing others. This is the case in corporate-based peer production such as Uber or Airbnb. Are they truly collaborative economies? This issue opens up a series of debates and opportunities about how to retain the commons and socially transformative dimension in the collaborative economy through the recognition of the distinctive values of these modes of production, beyond value approaches which focus on monetization, and new forms of open/peer/platform cooperativism.

However, public debate mainly focuses on the controversies around large corporations entering the collaborative economy. Thus, the public is mostly aware of peer production through these few large corporations. There is a growing need to organize and raise the visibility of the commons and socially-oriented model, and to address which are the conditions that should be present in order to characterise an economy or enterprise as “collaborative”.

Additionally, recent technological developments, such as emergent blockchain technologies, have opened up new avenues of commons production, management and distribution through more decentralized governance structures, which also open up very promising avenues for the evolution of the collaborative economy.

The event will follow up on the previous workshop FLOSS4P2P, organized by the P2Pvalue european project, this time expanding the focus to policy. It will provide an opportunity for policy people to interact with the technical teams of Free/Libre/Open Source Software (FLOSS) platforms for commons-based peer production communities, and to get a “deep dive” into how to promote the commons approach to collaborative economy from institutions.